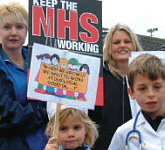 October 15th marked a decisive moment for anti-privatisation campaigners when the Gloucestershire Primary Care Trust announced that the county’s 8 community hospitals and health services (including 3000 nurses and other health workers would remain in the NHS. This reversed an earlier decision to outsource services by creating a ‘social enterprise’, in what would have been the largest such transfer in the country. Instead the board of NHS Gloucestershire voted to create a new standalone NHS Trust, and to reject the option of opening health services up to private sector bids.

The decision follows a hard-fought 18 month campaign by anti-cuts campaigners across the county, including a High Court challenge against the PCT’s outsourcing plans. Caroline Molloy of Stroud Against the Cuts said “This is a triumph for people power, and the outcome we’ve worked for from the start. We would like to pay tribute to the tens of thousands of people across Gloucestershire who have contributed to this victory for our NHS.” You can read more here – www.stroudagainstthecuts.co.uk – and you can pass on your congratulations here – contact@stroudagainstthecuts.co.uk

Meanwhile, a campaign to fight the coalition government’s NHS reform plans is gathering momentum, as doctors from City and Hackney announced they will be the first in the country to write safeguards against privatisation into their constitution… They’ve joined forces with national campaign group 38 Degrees to create what they hope will become a model constitution for the rest of the country. Read more here –http://bit.ly/SskLlf