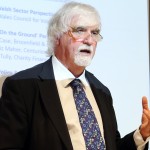 English second tier bodies have largely given up on retaining grant funding for voluntary groups but vigorous support for the virtues of grants over contracts persists in Wales. A recent BBC Wales report quoted Graham Benfield, Chief Executive of Wales Council for Voluntary Action, as saying the procurement process of offering and awarding contracts for work is “enormously expensive and it tends to destroy collaboration, local community ownership and ends up in a worse service than you had before using grant aid”.  He said grants were a better way of supporting voluntary and third sector organisations, while there was often a loss of service with a shift to contracts or procurement.

In an interview with NCIA, Graham told us: “The Welsh Assembly has repeatedly said that it intends to retain grant funding but private sector influence and attitude does leach across the border, as do some of the assumptions that now drive officers and professionals within the English statutory sector. This has shown itself in an informal drift towards contracts, and towards competitive procurement to be specific. These practices may be useful and effective for buying products – drawing pins – but for social, health and other person-based services it does not work – the specifications are not specific or sophisticated enough. And the process runs away with itself – both politicians and officers lose control of the process and thence the outcome.”

Part of this, according to Graham, is down to an over-cautious approach to EU rules on state aid, procurement and fair competition. And many Welsh local authorities have fallen into the same trap of assuming that they have to adopt procurement approaches when in reality they do not.

It is important to understand some of the political differences between England and Wales. The Welsh Government has a political commitment to keeping the private sector out of public services. As a result there has been little outsourcing of public services and this includes outsourcing to the voluntary sector. Where procurement exercises have been undertaken these have mostly been related to shifting grants into contracts (i.e. the re-tendering of funding that was already going into the sector as grants).

But Graham sees co-production as the way forward. He told us: “We have no problem with the concept of ‘commissioning’. It is entirely proper for public bodies to examine community needs, reach agreement on the best ways of meeting those needs and then find the right bodies to deliver the services. The key is in the way in which these processes are undertaken, the most effective ways being those that involve users, communities and delivery agencies in the design of services, and their delivery, in a collaborative rather than competitive environment. One can’t procure happiness or safety, for example, but if these are the ultimate goals then best design the services in ways that allow these goals to be actively debated and incorporated.”

With Swansea CVS, WCVA has produced a useful guide to grants and contracts and the complex maze of public procurement and state aid rules, and the public and administrative law considerations that need to be dealt with – Grants and Contracts: Guidance for Third Sector Organisations and Public Authorities (September 2013). You can get a copy by ringing the WCVA helpdesk on 0800 2888 329.