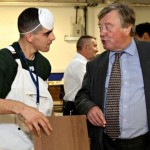 Recently the Government announced that it was pulling the plug on the Peterborough Prison Social Impact Bond (SIB) pilot, despite an interim evaluation showing “promising results”. This scheme – due to have run for seven years instead of the three now planned – has been dragged round the conference circuit now for several years by ministers, civil servants and voluntary sector ‘leaders’ as the SIB flagship, showing the way to the bold new world in which our vital public services will be financed for profit by private investors, hedge funds and charitable foundations. So why shut the scheme early? The government says that this was for reasons of consistency to allow the ‘Transforming Rehabilitation (TR) privatisation programme to replace SIB in this area. However, the evaluation of another SIB – at Doncaster Prison – showed much poorer results. And this scheme is being run as a payment-by-results project much closer to those proposed for the big probation sell-off. So here’s the key – Peterborough is being scrapped because it will make TR look cheap, risky and unreliable. We’ve uploaded a paper from Les Huckfield that lifts the lid on this double dealing – you can be shocked (maybe not?) here