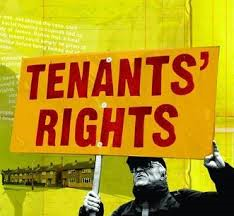 Conditions for private renters – now a bigger group than those renting ‘socially’ from the council or a housing association – have become so bad that a new wave of housing activist groups has begun to form. Since the deregulation of private renting in 1989, when rent control and long-term tenancies were done away with, the power of private landlords has grown to a point where many of their tenants are forced to spend more than half their earnings on rent, and a legal minimum tenancy of only 6 months means they are powerless to complain about disrepair at the risk of being evicted. Landlords have been allowed to abuse the housing benefit system to push rents up, knowing that the council has a duty to pay inflated private rents, while many who have profited from the resulting increase in ‘market rates’ refuse to accept tenants who need housing benefit – pushing those on the lowest incomes into the hands of the worst landlords.

In London, where the situation is worst of all (two in five of London’s private renters now live below the poverty line, home ownership is out of reach for almost anyone without inherited wealth, and ‘social’ rented homes are so scarce that they are only allocated to the very vulnerable), private renters have begun to organise themselves in their boroughs, aiming to put pressure on local authorities to be more active in enforcing standards and to reign in the worst landlords in their area. Camden and Brent have had their own private renters’ groups for many years, with partial funding from their councils to provide information and advice; many of their clients are older tenants, on pre-1989 tenancies with greater protection. But between 2011 and 2014 it was a younger demographic that took action and established private renters’ groups in Hackney, Islington, Southwark, Tower Hamlets, Haringey, Lambeth and Waltham Forest. Holding meetings in cafes, pubs or community centres, they patched together their spare time and energy to find ways of raising awareness of private renting problems. The majority were new to campaigning, full of zeal and excitement at ‘doing something about it,’ even if they weren’t sure what that something should be. Others had more knowledge and skills from professional experience in journalism, NGOs or formal politics and knew what a hard task they had ahead of them.

All groups, in one way or another, want affordable rents, better living conditions and longer, more secure tenancies. But they vary in outlook and approach. While most want to campaign for better regulation of private renting through legislative change, they differ when it comes to what form this campaigning should take. For example, some prefer eye-catching street protests that highlight problems without committing to any specific solutions, while others prefer to target policy makers with specific proposals, and others want to simply educate renters about how to use their existing rights and encourage them to teach others. Many groups have tried a combination of all three, with varying degrees of success.

Some groups chose to register as charities from the outset, establishing internal structures and securing funding from community trusts. Others took a looser approach, avoiding formal structures and the potential restrictions of funding, though they were not always aware of the problems this created for democracy and accountability within the groups themselves. Other groups took the somewhat contradictory position of wanting policy change while refusing to engage with policy makers at any level – directing their energies, instead, on practical support for individuals suffering the effects of existing policies. Knowledge and political understanding also varies: older activists with professional experience in the political sphere emphasise the importance of developing coherent messages and tactics, and using the media wisely; younger ones might not know the difference between a local authority and a government department but simply want to shout until their voice is heard. As with any group of humans, self-interest, vanity, prejudice, totalitarianism and apathy have all reared their heads, but so far, most groups have muddled through. But only just: what they all have in common is that everyone is a volunteer, squeezing their campaigning activities into pockets of spare time, operating on shoestring budgets or none at all, trying – and often failing – to find the energy and resources to write another email to a distressed renter, respond to another policy consultation or organise another demonstration while hanging on to a room, a flat, a job, a career, relationships or a social life.

So when the money was found to establish a professional group – Generation Rent – to campaign for better renting without these limitations, it should have been good news. Here was a new organisation with more than £1m behind it; enough to pay several experienced professionals a full time salary, fund research, communications and lobbying, establish the credible face of private renters in Westminster and offer local groups the resources they so sorely lacked.

But some groups were furious. They had been working unpaid for a year or two, making personal sacrifices, laying foundations, forging alliances and defending themselves against critics. From hard slog, the movement was growing – and it was hard to deny a feeling of ownership. Generation Rent were invading their turf, and what’s more, they had plans to set up local Generation Rent groups to campaign at a local level. Worst of all, Generation Rent were partly funded by the Nationwide Foundation – a trust attached to a building society that provides private landlords with buy-to-let mortgages.

The resulting discussions among renters groups raised interesting questions about the purpose and nature of campaigning, about the conflict between insiders and outsiders – and, at times, about the things campaigners of all kinds are not always willing to admit to themselves.

Looking for a justification for their fury, some activists argued first that Generation Rent could not be the national voice of renters, since none of its staff were private renters themselves and therefore did not know what the experience is truly like. This, in fact, turned out to be incorrect (all the staff, actually, are private renters). Some asked if it mattered anyway, pointing out other injustices that can be understood without experiencing them first hand – or asking if a decade of terrible treatment in the private rented sector was invalidated if it was followed by an escape into either home ownership or social renting – but with little response. In this case, the critics had made the same mistake made by those who claim that the private renting system is not broken: they had assumed that the only people to suffer are those who speak a certain way or have a particular type of job. In doing so, they revealed an uncomfortable truth: that people seen as belonging to a ‘professional’ class had not been made welcome by all the groups – and that in appointing themselves to speak for ‘all’ private renters, the groups had in fact misled themselves.

Activists argued that they could provide what a professional, national organisation never could: real relationships between people living near each other – making people more likely to help each other than if they were being directed from above. These relationships looked different to different people: to some, they appeared cliquey and off-putting to those that didn’t fit in.  But certainly, ‘voluntary action’ in its truest sense – doing something you have thought of, in the way that you want, simply because you want to do it and you can – can’t be replaced by orchestrated activism directed by a national organisation.

Generation Rent offered existing groups digital tools and media training in return for affiliating with the national organisation and adopting their branding. Understandably, most groups were wary of being co-opted by strangers bearing gifts and have so far held back. But in their choice of what to offer, Generation Rent misunderstood what activists really need: money and time. Most groups were already using open source software that met their needs, and those who were confident enough to act as media spokespeople usually had enough media experience not to need training. But if Generation Rent were to offer funding to give activists more time to spend on their activities –rather than having to squeeze them in around other paid work commitments – they might get a better response. How far affiliated groups must accept the policy positions of the national organisation is, as yet, unclear. But so far, renters groups have not found any policy in Generation Rent’s manifesto to disagree with – to the disappointment of some.

Generation Rent invited consultation responses from the independent groups on national structures and on policy positions. It is unclear how many responded, and to what extent their suggestions were taken on board, but some kind of dialogue is taking place. It is not always comfortable; the relationship between those ‘inside the tent’ and those outside it never is. One group has demonstrated its objection to Generation Rent by setting up a mirror image of it: an umbrella body to which independent groups – at least those in London – can apply to join if they meet the umbrella body’s approval. It has aped the very structures it criticises; it has responded to what it feels is an imposition of power by trying to impose it on others.

The introduction of Generation Rent to the fold also reveals a culture clash. Those who take pride in their outsider identity wear it like a badge: not for them the wearing of suits, using policy-speak or negotiating with their enemies. If the means to the end require that kind of compromise, then the end is not worth it. But for others, the end is what matters – whatever it takes. Radicalism now appears to have two meanings: for some it means addressing the root causes of a problem rather than its effects. But for others, it is an identity: a way of dressing and behaving, a way of demonstrating to the world who you are, rather than what you want to change.

Any kind of campaigning throws up a tension between the goal itself and the goal scorer: campaigners want a particular change, but they also want to be the ones responsible for it. To let go and see the change introduced by someone else takes grace and commitment to the cause, but those who finally win the change must acknowledge and respect the people who began it. When insiders and outsiders see this, and see how they can work together, real change is possible. Many of the independent groups are now working with Generation Rent in one way or another – but it’s too soon to tell what the end result will be.