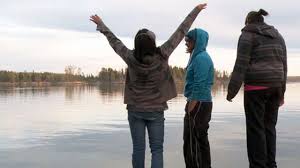 Rivers Edge Community Project (RECP) defines its overall mission as ‘to promote a vibrant, self-sustaining community in the Rivers Edge estate and surrounding area’ and its core values as:
– working ‘with’ members of the community and not ‘for’ them.
– developing activities and resources that are locally owned and run’.
– helping those involved in the project to acquire new skills, knowledge and confidence.
– working in partnership with other organisations.

Seeing itself as a community development organisation, RECP offers programmes of activities which include under 5’s play sessions, a community café, after school clubs, youth clubs and other provision for young people, adult education courses, a job club and a seniors programme. It also works with other agencies to support local people by offering welfare advice sessions, exercise classes for adults and seniors and mental health support.

Its board of trustees currently has nine members with two vacancies in the process of being filled. Four of the trustees live on the estate and the remainder in the wider council area. One is a local councillor.

It employs twelve part-time staff including the manager and has thirty volunteers.

Past and current funding
With an annual turnover of £250, 000, year on year RECP has had small deficits or broken even.

RECP has £50,000 a year contract with the local council to provide youth services on the Rivers Edge estate. Other statutory funding provides between 5 and 10% of its income – a reduction of around 45% since 2012. In 2013 the local council also contributed to major refurbishment of its building.

Other sources of income include local donations and fundraising and trusts and foundations.

Future prospect and planning
• Consolidation – ensuring that the financial strategy the Project has implemented can continue to sustain its current level of work.
• Planning for the negotiation and re-commissioning of the youth contract in 2015.
• Planning for the end of the Reaching Communities funding in 2016.
• Developing several new areas of work to meet the needs of local people including provision for children and young people with additional needs and disabilities and learning support for ethnic minority residents.

Surviving independently
Having expected and planned ahead for the local council’s shift to commissioning, in one key area RECP has experienced this as an opportunity rather than a threat. Long dissatisfied with the council-run youth club run meeting in the RECP building, the project was able to use the council’s decision to contract out its services to take the estate youth provision in-house, including employing its own youth work manager and part-time youth workers. With follow-up reporting procedures being only loosely applied – and despite some pressure to for example meet accreditation targets – RECP has had considerable freedom to carry out the work in its own way. However, as a small voluntary organisation it found the original commissioning and procurement process cumbersome – the result in part, it concluded, of the council initiating these before the necessary policies and structures were in place. With the council itself undergoing major internal restructuring, it was also left unclear about the council’s future intentions for much of the final (third) year of the contract – though this has now been extended to March 2015.

RECP’s experience of another council commissioning process, however, was far less positive. For many years it had received £25,000 a year for its community development work – a major contribution to the project manager’s salary. However, following a change of political control, the council’s focus shifted to what it called ‘community involvement’ aimed at building local communities’ capacity largely through the use of volunteers. In addition, with a much reduced overall budget (£75,000 a year for two years), the council required a single-consortium bid to provide a borough-wide service. As RECP found its way through the often sensitive negotiations this demanded, not just with the council but also with its consortium partner, it had to resist considerable pressure to go beyond what it was clear was its core brief – serving the Rivers Edge Estate. This experience also revealed how, rather than supporting local partnerships and co-operation, consortium-working could add significant tensions to those relationships.

As a voluntary organisation RECP continues to pay a price for its independence from the statutory structures and procedures – exemplified, for it most worryingly, in the blocks to it getting a seat at the appropriate table when it identifies a young person or one its older users as in (perhaps urgent) need of specialised help. However, in holding to its role as a local community facility, RECP is steered by its awareness that ultimately its value and credibility come from those local roots and relationships – from, as the Centre Manager describes it:
… the day-to-day, one-to-one interventions with local people who come into the centre: the parents who use the under-5s provision; the young people coming to the youth club; the isolated old people who call in, some every day… Our independence gives us choices.